The Maltese Islands are in the very middle of the Mediterranean Sea, only 90 km from the southern part of Italy. Malta is the largest of the three islands. 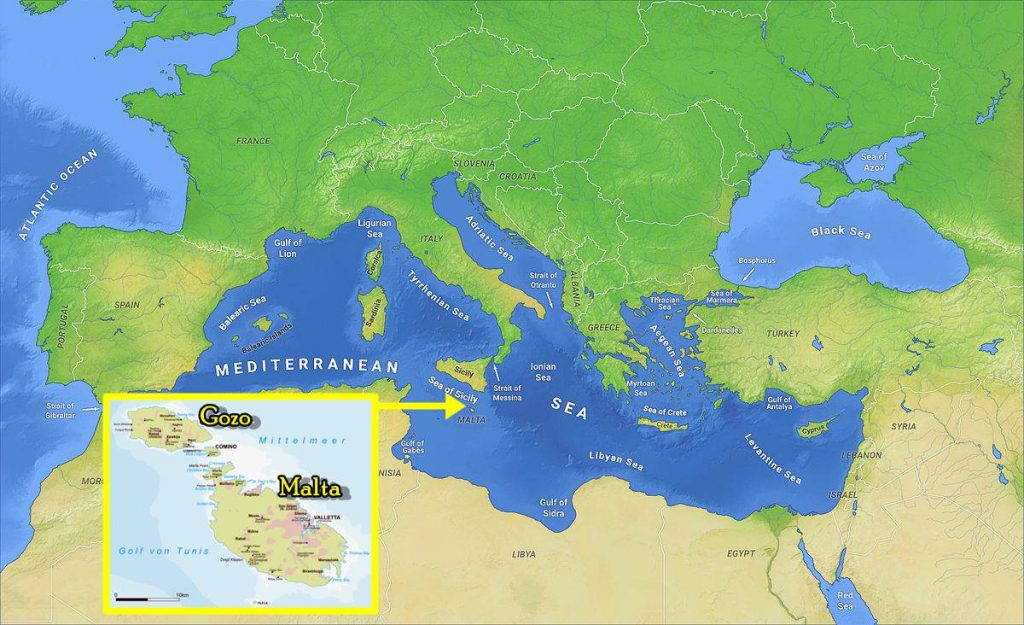 Gozo, the sister island of Malta is one of the few remaining unspoilt islands in the Mediterranean. Below we have specially listed some of our favourite places you must visit on the island of Gozo, Malta.

Recently restored, the Gozo Citadel locally known as ic-Cittadella is an essential part of the history of Gozo island.  Centrally located overlooking Victoria, Gozo’s capital city, the Citadel protected for centuries to local inhabitants from the never ending invasions on this little island.  Today, visiting the Citadel is journey back into history where you can understand what it meant to live on a small unprotected island for centuries. Bastions, narrow streets, old houses, museums, exhibitions, cathedral, chapels, niches are only some of the Citadel’s characteristics waiting to be discovered.

Mgarr is the first sight of Gozo you get when you arrive by ferry at the Mgarr ferry terminal from the island of Malta. However, Mgarr is not only a getaway to the whole island of Gozo. Rich in history and craftsman skills, Mgarr is the main fishing hamlet on the island.  For many years, it was also the pioneer in spreading agricultural knowhow to the local farmers.  If we go back further into history, pirates across the Mediterranean used to stop here for its two main natural springs.  Today, Mgarr also hosts a yatch marina, has its own lovely little beach, a beautiful waterfront promenade with some amazing award-winning seafood restaurants, bars and shops.

The prehistoric megalithic temples known as ‘Ggantija’ are found on one of the flat topped hills which dot the Gozitan countryside. There are two Gozo temples, the North and the South one. Basically they are very identical.

However what is amazing and what many travellers ask is: How could people 3600 years BC have carried such huge slabs?  Where did they bring these megalithic stones from? Unfortunately, many questions remain unanswered though archaeological research is on going on the island. The structure is truly impressive and its history is truly inspiring.

Dwejra – Home of the lost Azure Window on Gozo island!

Did you know that in the Maltese islands there are 365 churches and chapels, that is a church or chapel for every day in a year? Well, in Gozo, churches are more than religious places. Gozitans love their churches and their strong sense of community is very well evident in the actual size of churches for such small communites as well as to what extent churches are extremely well organised and maintained.  The Dome or as locally known as the Rotunda of Xewkija village is a truly example of this.  Perfect symmetry using the local main globigerina limestone, it is a truly awesome to experience the local craftsmen skills in building such a huge temple.  Just some quick figures….

Unlike all the other churches which are found in the very middle of the town and village communities, Ta’ Pinu sanctuary was built in the middle of the countryside on the west coast of the island of Gozo. The below picture illustrates the view of this most important shrine on the island from a little old house belonging to a lady named Carmela Grima.  Carmela was once walking in the fields when she heard someone telling her, or better urging her in Maltese for 3 times: Ejja! which means Come! Carmela admits that there was no one around her and the voice came from the fresco of Our Lady in the small chapel of Ta’ Pinu.  Years passed and devotion increased and the little old chapel was extended to a large church we see today.  This is only a drop in the ocean of the amazing heritage and stories, yes stories from all around the world you will see when visiting this shrine.

Famous for its red sandy beach and for being the largest beach on Gozo island, Ramla bay is popular throughout the whole year. Of course summer time is the busiest period at Ramla bay because many flock to this gorgeous beach for swimming and sunbathing.

However, in autumn and winter time, maybe it is even more attractive. It is certainly more quiet and makes an ideal place for a coastal walk on the island.

A little sandy bay on the south coast of Gozo island, Xlendi is a very popular place with both locals.  Graciously surrounded by high Gozo cliffs on its western side, Xlendi attracts travellers for its simplicity and natural beauty.  A walk from the bus stage in Xlendi bay to its seventeenth century tower across the Gozitan countryside is certainly enjoyable and rewarding. Just sitting there or having lunch in one of the waterfront restaurants is enough to savour peace and simplicity.

Beautifully located Mgarr ix Xini is a little gem on Gozo. Great place for swimming, snorkelling and diving. Walking? Absolutely fantastic especially during the winter season. Very peaceful and secluded.  No wonder Angelina Jolie and Brad Pitt specially chose this place for their first new film together named By The Sea.

We strongly believe that walking is one of the secrets for great travelling.  On such island like Gozo, walking is even more rewarding because all of sudden it opens up to you great panoramas of land, sea and sun.  The cliffs surrounding the Gozo coastline such as Sanap cliffs are amazingly beautiful and rich in both flora and birds which nest there.

Courtesy: use of Mediterranean and Maltese Islands maps