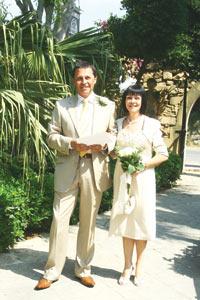 A mystery local diver came to the rescue of two distraught Scottish newlyweds when the groom lost his wedding ring while swimming off the rocks at Marsalforn.

Glaswegians Norman Smith, 58, and his wife Susan, 52, had only been married for a day when their honeymoon was derailed by the unfortunate incident in late June.

In their desperation, they dashed to the hotel where Mr Smith’s daughter was staying in Xaghra to retrieve her snorkelling kit, but a 30-minute search on their return proved fruitless.

Dejected, they returned to their car and were about to leave when a car pulled up alongside and the driver started gesturing at them.

“At first I thought we were in his parking space and he wanted us to move,” said Mrs Smith.

“Then I looked closer and I realised Norman’s ring was on his finger – I couldn’t believe it.”

It transpired that a nearby teenage snorkeller had fetched her father, an experienced diver, to help find the ring when the couple left for Xaghra. Together with his son, the diver scoured the area underwater and found the ring lodged behind the ladders which led to the sea.

Not happy with merely finding the ring, the diver and his son then drove around for half an hour trying to find the newlyweds based on the description his daughter had given.

Luckily, they crossed paths just as the couple were about to leave, and Mr and Mrs Smith could not thank him enough.

“We totally thank him from the bottom of our hearts, I gave him a big hug at the time and he probably thought I was a mad woman,” Mrs Smith laughed.

“It is a testament to the kindness of the people in Malta and Gozo. It is easy to commiserate with people when things go wrong but you just don’t expect people to go out of their way like this man did.”

The couple, who were married at Ta’ Frenc in front of seven close family members, are regular visitors to Gozo and will definitely return in future.

However, they may have problems tracing the diver as he only gave his name as ‘Joe’ and he was “in his late 40s”; surely not the only person fitting that description in the area.

But regardless of whether they meet again, Mr Smith has taken an inspirational lesson from the experience: “Everyone out there should never give up hope, especially when you have the amazing help of the kind people of Gozo.”