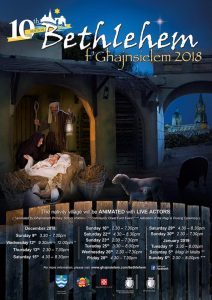 Gozo Christmas Village or as it is popularly known as Bethlehem f’Ghajnsielem opens on Sunday 9 December 2018 at 3.30pm and remains open until Sunday 6  January 2019 8.00pm.

This is the tenth edition of one of Malta’s main attractions during the Christmas holidays.  The ‘holy’ family in the above official poster is Joseph Azzopardi, Melanie Azzopardi and baby Thea. 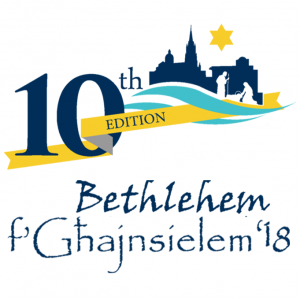 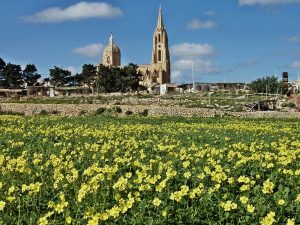 The Nativity Village takes place in an area locally known as ‘Ta’ Passi’. It is just a stone’s throw from the main centre of the village-by-the-sea of Ghajnsielem on the island of Gozo, Malta. The whole animated village is spread over a 20,000sqm of land and through various combined works of the local council and volunteers, the first Christmas village is created to provide a wonderful Christmas atmosphere. 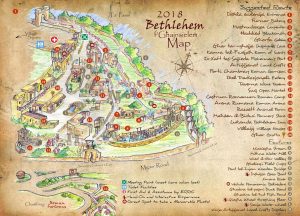 Some of the primary attractions include 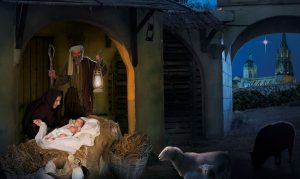 Visitors to this year’s edition can enjoy some of the traditional food including Maltese bread and buns, the local pizza like known as ftira, honey rings and traditional coffee and Gozo wine. 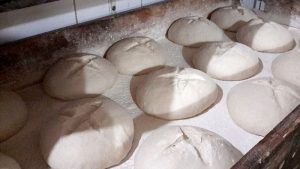 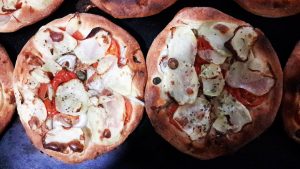 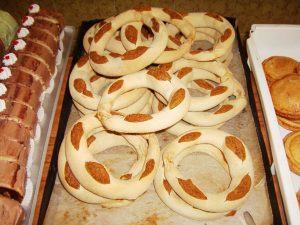 The Christmas village comes to a wonderful end with the arrival of the Three Kings on horseback on Epiphany Sunday afternoon 6 January 2019. 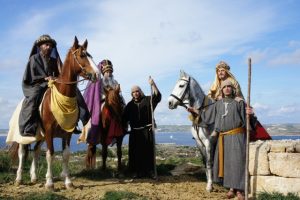 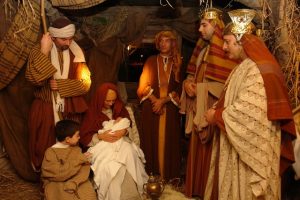 How to get here

From Valletta bus station, take bus #41 or #42 direction to Cirkewwa ferry terminal from where you get the next ferry to Mgarr ferry terminal. Once arrived in Gozo, it is just 10 to 15 minutes walk up to the Gozo Christmas village. At the exit of the terminal, you can also take bus #301, #303 or #323 and stop at the bus stop Chambrai on the Mgarr Road or proceed to the next bus stop Ghajnsielem in the very centre of the village of Ghajnsielem.

From the Mgarr ferry terminal it is just 10 to 15 minutes walk up Shore street and turning left to Mgarr road.

The Christmas village is just across… on the same side you’ll see the big church of Our Lady of Loreto, Ghajnsielem.

From Victoria bus station it is 10 to 25 minutes bus ride. You can take bus #301, #303 or #323 and stop at bus stop Ghajnsielem in the village square or on Mgarr road by stopping at the bus stop Chambrai.

From Gozo Holiday Home it is just 10 to 12 minutes walk or 3 minutes by bus #303 to bus stop Ghajnsielem in the very centre of Ghajnsielem village or 5 minutes bike ride by our free new bicycles. 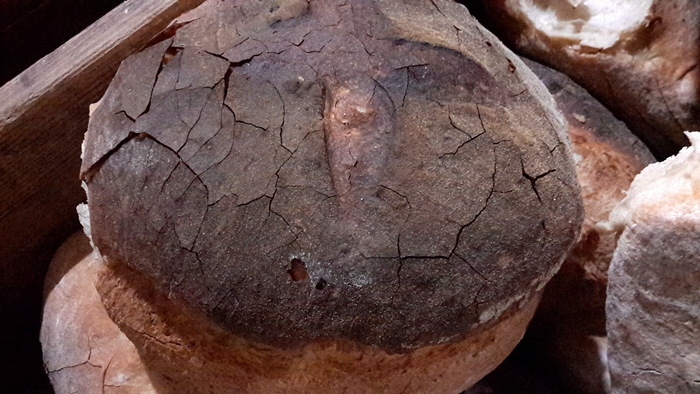 Part of my work in running a boutique self-catering accommodation on Gozo and providing a truly personalised hospitality is certainly recommending the right places, which sites and when to visit and also where to buy authentic locally produced food and eat out.  This is one of such places where to meet locals and eat the local way. 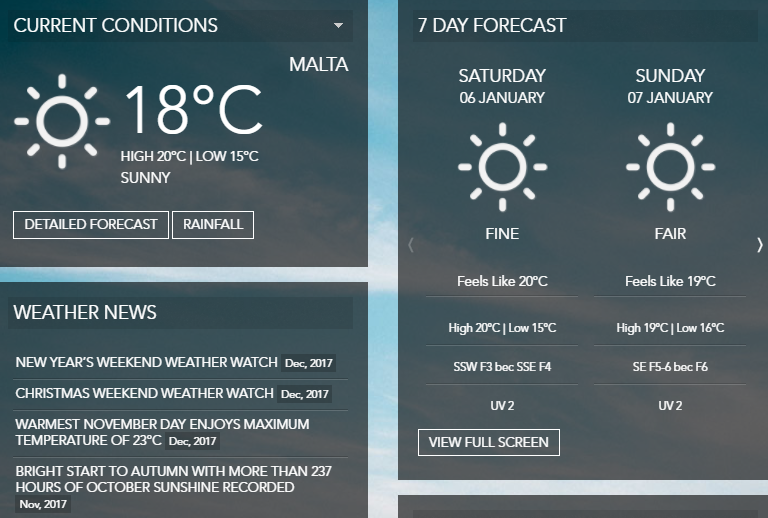 It is exactly 7.00am at Debono bakery in the very centre of our village-by-the-sea of Ghajnsielem on the island of Gozo.  Oven temperature is almost 500 F, equivalent to 260 degrees Celsius.  Robert and Terik, the bakers have already been working for over three hours. The freshly baked bread is finally ready. 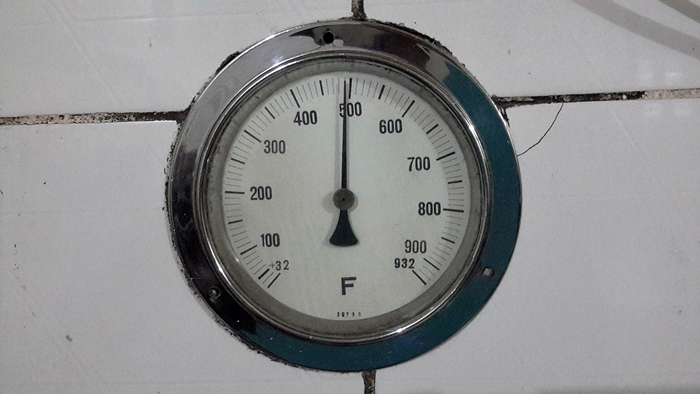 Unfortunately words cannot describe the aroma of the bread coming out from the bakery oven!  Robert and Terik are very busy bringing one Maltese traditional bread after another, putting each one side by side in long wooden boxes called tilari in Maltese.

After the bread is all taken out, you can still hear the tender sound of the crispy bread. 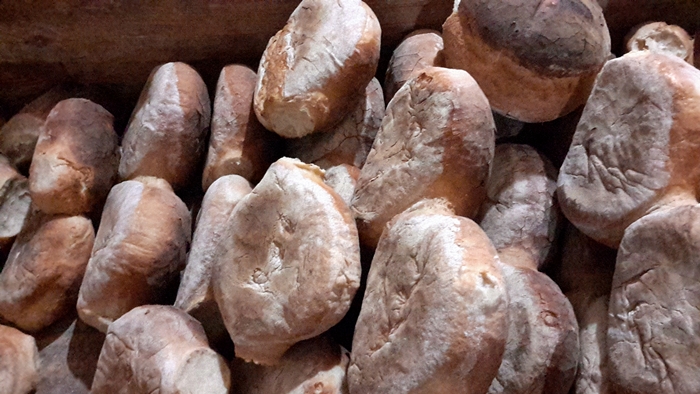 The Maltese traditional round bread is locally known as il-hobza Maltija, It is normally baked in two sizes, small and large.  At the bakery, the locals started coming to get the freshly baked crispy round bread.  I could hear a lady asking the third baker Naim for Wahda kbira jekk joghgbok that is one large bread, please.  Another man soon asked for two small ones and very well done – Aghtini tnejn zghar u ftit mahruqin.

The locals have different likes for the bread. Some of them prefer the Maltese round bread more white in its texture that is just baked to the minimum. Others, however, prefer their bread to have a crunchier crust and therefore some Maltese bread are perfectly baked to have that special dark brown crust.

At the bakery, apart from the Maltese round bread, one can also buy the traditional loaf, which is more of an oblong shape. Clients who prefer to have a thicker crust generally tend to buy the local loaf. 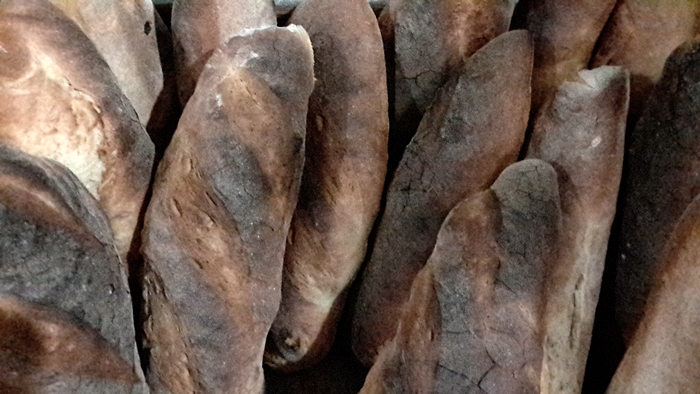 By 7.15 all the Maltese round bread and loaves are ready. However for Robert and Terik it was time now to put into the oven more bread doughs.  In a few minutes, all the bread doughs in the remaining four wooden boxes were put inside the oven. 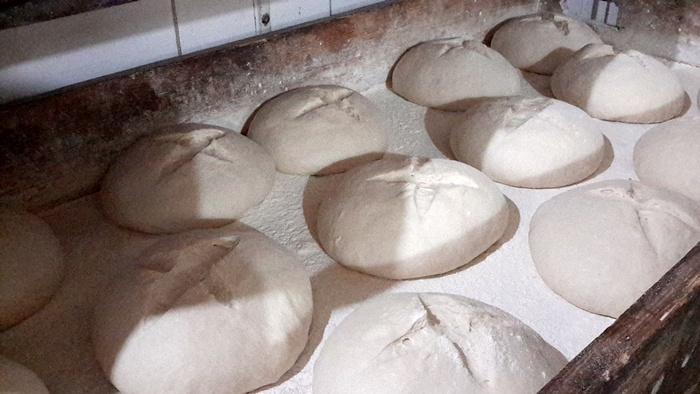 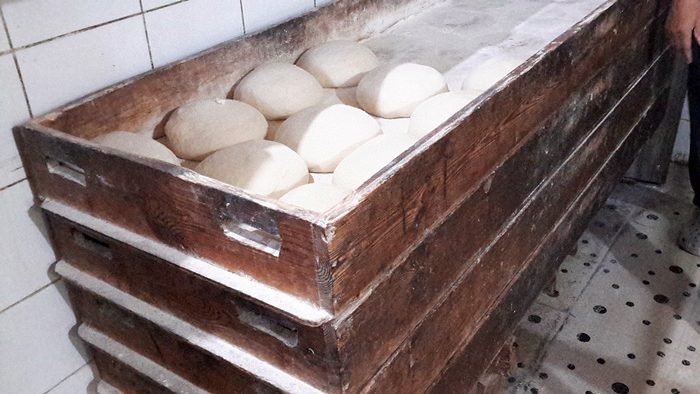 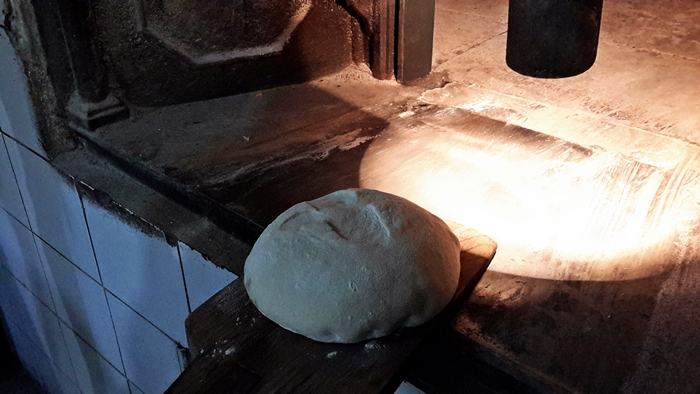 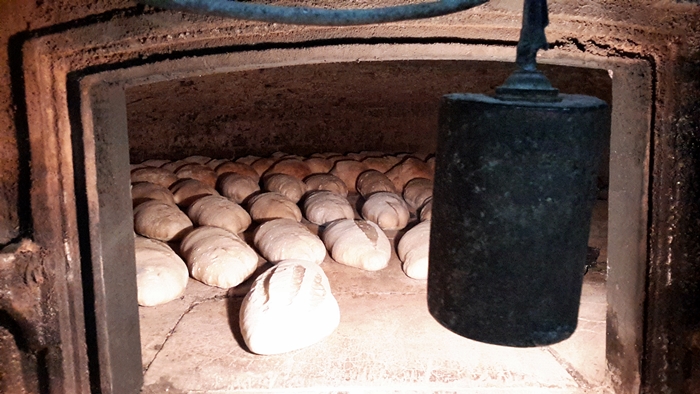 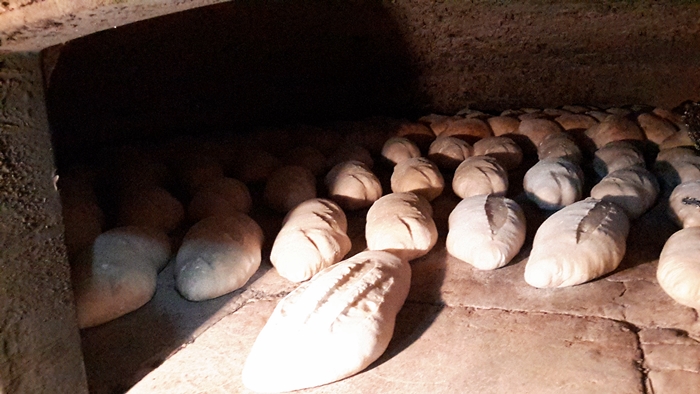 Meanwhile, Naim was busy using the bread slicing machine to slice both the traditional round bread and loaves and put them into plastic bags. This is normally done after the bread is no longer warm. Some of the locals prefer to have it sliced ready for toasting and sandwiches. 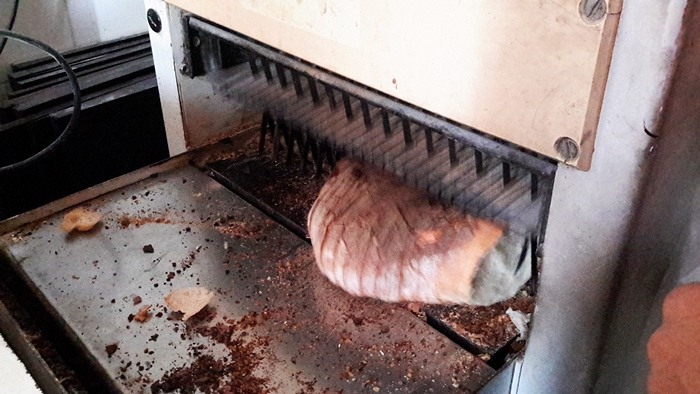 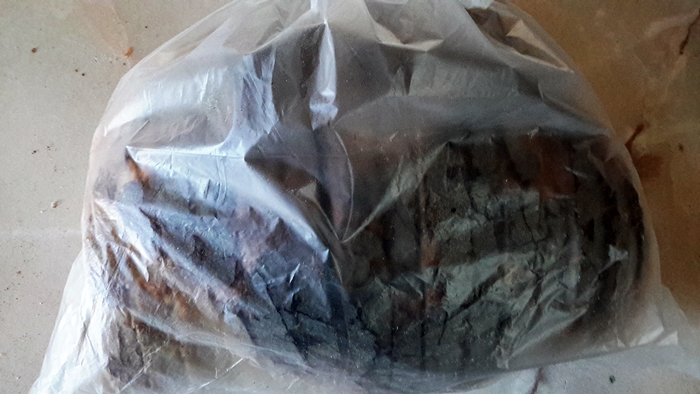 At the bakery I could not but notice the delicious local pizza known as ftira.  The ftira is similar to pizza but with a thicker dough and crust as well as different toppings. Basically, at the bakery you find two types of ftira. The tuna ftira and the anchovy ftira. Both of them contain toppings such as thinly sliced potatoes, onions, red tomatoes, capers, olives, olive oil and of course either tuna or anchovy. Being a local, it is not the first time that I have to phone Robert, Terik or Naim to specially hold for me some ftiras because like the bread, ftiras at Ghajnsielem Gozo are sold out in a few minutes! 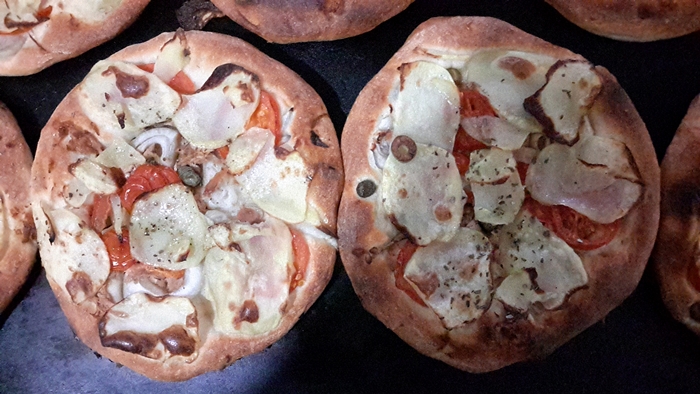 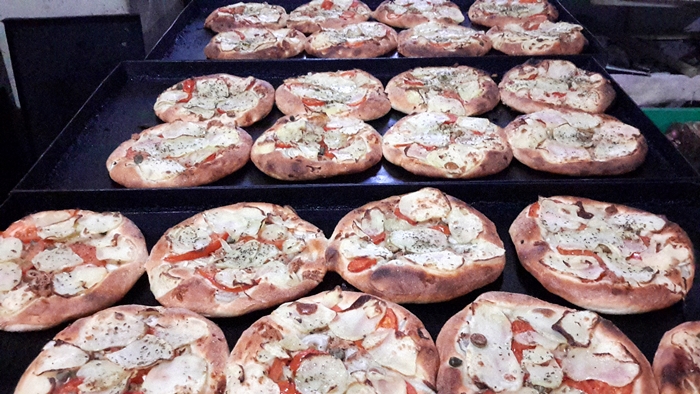 Of course if you are on holidays on Gozo and would like to try some bread, at the bakery you can find also the ftira tal-hobz or pizza like bread which is perfect for toasting or filling with ham or cheese or tuna and salad. So, the next time you visit the bakery and you ask for a pizza style ftira, kindly identify if it’s tuna or anchovy you prefer. If you simply ask for a ftira you will be handed the pizza like bread you can then fill in with your favourite cheese, ham, salad and other fillings. 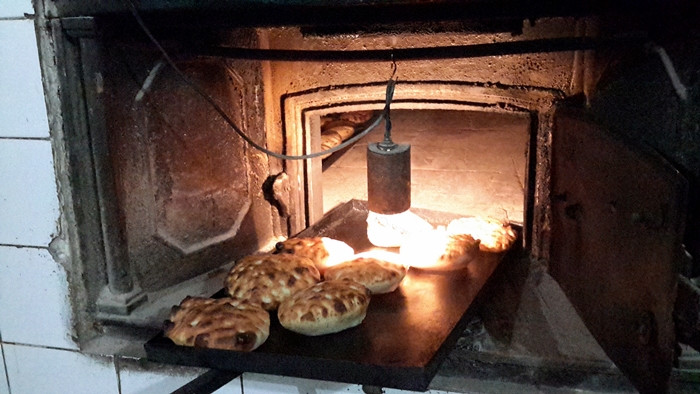 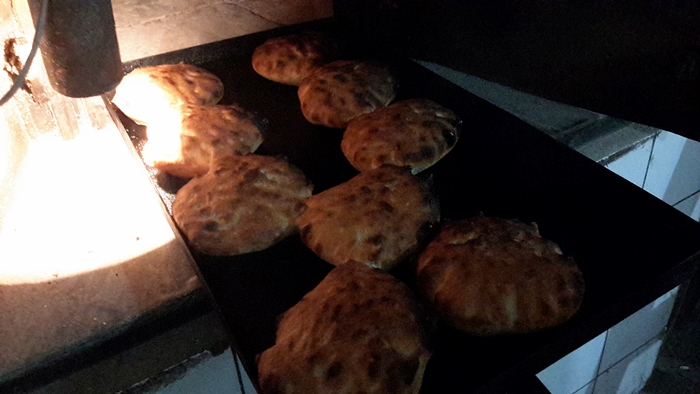 Other bread you will certainly enjoy would be the buns locally known as panini. These are very popular with families to prepare a healthy school lunch for their children but also for parents themselves at work!  There are also the mini loaves, bziezen zghar. In the local street food, you will find these widely used for burgers and hotdogs as well.

Certainly in the morning when the bread is just ready.  Absolutely irresistible!  You can just eat the bread by itself or as the most popular Maltese snack, hobz biz-zejt that is crispy bread with halved red tomatoes, olive oil, sea salt, freshly grounded pepper, Mediterranean capers and fresh basil leaves.

It is open every day – mornings and afternoons. Freshly baked round bread, loaves, buns and mini baguettes, tuna and anchovy ftira every morning from Monday till Saturday.  Saturday and Sunday evenings are pizza making only.  We’ll talk about that in another post.

How to get here

From the Mgarr ferry terminal take bus #303 or #323 and stop at bus stop named Loretu.  The bakery is just across the Our Lady of Loreto Square, Ghajnsielem.

Will the baker understand me?

Yes definitely.  Maltese people are bilingual. Maltese and English are both official languages on the Maltese islands.  Practically the whole population speaks both Maltese and English and a large majority speak Italian and some German and French.  Besides, people here are friendly and helpful. 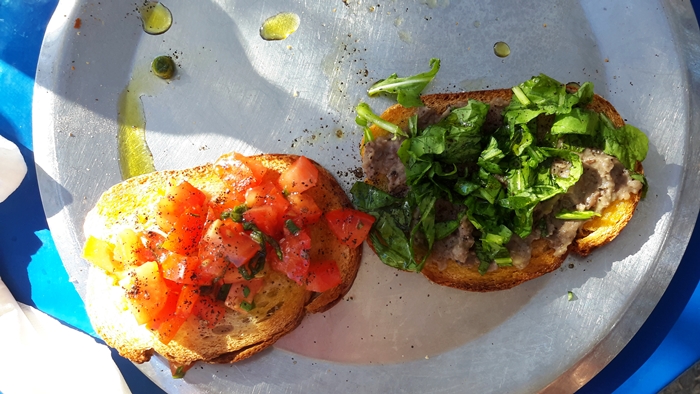 Our properties (Licence Ref: HPI/6006) have also been inspected by the Malta Tourism Authority (MTA) and graded as Comfort Class accommodation.